A 12.5% chance of something interesting. 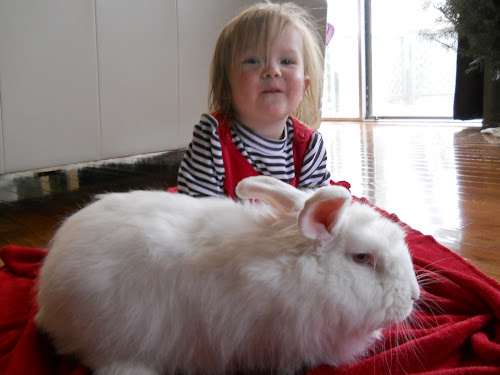 Today I bred Thistle, our ruby-eyed white buck, to Dandelion, our fawn colored doe. What an experience. I actually felt a little awkward about watch two rabbits “do the deed”, but now I know what to look for. When they say the buck falls off the doe when it’s all over… they mean it. He literally fell on his side. It was kind of amusing actually.

As someone who has always had neutered or spayed animals, it is so foreign to purposely put two animals together to achieve more animals. Babies are what you usually don’t want. But now my mind is being reformed and a litter of rabbits is hopefully on the way.

Rabbits take about thirty days to gestate but can deliver kits anywhere from 27-34 days after conception. We’ll see! Dandelion’s litter should arrive around February 25th. Originally I wanted to breed Clementine first, but she isn’t old enough yet and Dandelion is. 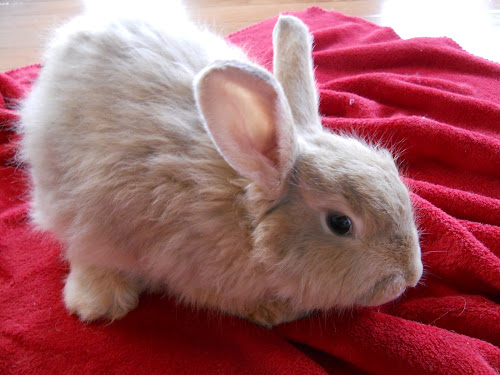 So about that 12.5%. Dandelion and Thistle’s litter has a 50% chance of being Ruby-eyed Whites and a 12.5% chance of being an interesting color. While Ruby-eyed Whites are necessary for certain breeding pairs, let’s admit that they aren’t the most fascinating to find in the box. These colors are grouped together by genetic possibilities and I won’t confuse you with the details of color genetics… because honestly, I don’t fully understand it myself. Here’s a little list of what might show up:

I’m rolling the dice for Orange or Red or Black! How cool would black angora yarn be? I know!

Did I tell you we finally got some rain? Friday night and through the day yesterday it rained. Not a real downpour but certainly more than a sprinkle. We also got some hail. Briefly. No snow though. I’m starting to wonder if we will get any snow this year. Then again, we often have snow in February and March. 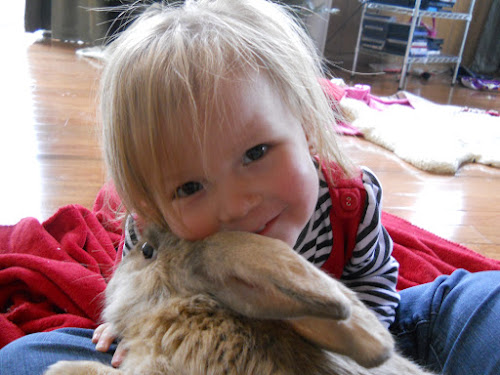 This morning I decided it was “farm chores” time. We usually do repairs, clean the coop, clean the rabbit cages, work on the compost/garden on Saturdays, but as I said, Saturday was washed away. We actually had a good time baking and watching movies instead.

That left all the chores for today. Which is fine with me. It just gives me a little more motivation to have everything ready for the week ahead of us. So, the coop was shoveled out and the soiled bedding was replaced with hay. I usually fill their coop with dry leaves to save on costs (and honestly who wants all those pine shavings in their compost constantly?) , however after a good rain everything is as can be expected, soaked. So some of the rabbits’ dry hay will have to do. Really, a whole $20 bale of hay has lasted over a month and I’m only about 1/6th of the way through it. I am a little worried that if I let it sit too long it will get too moist and go bad before the rabbits have a chance to eat it all up. 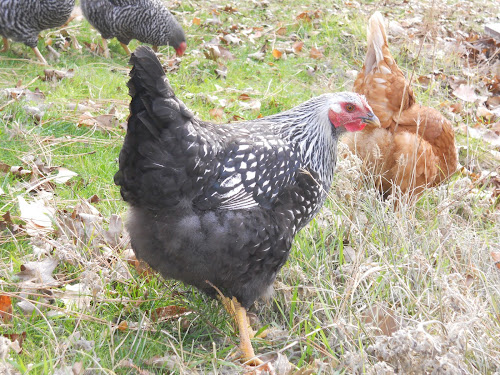 Rabbit cages are a pain in the arse to clean, let me tell you! The actual physical act of dumping the contents of dropping pan into a wheelbarrow is not difficult. Playing musical chairs with the rabbit-filled rabbit cages is. I cannot wait to get some racks built to make my life -and cleaning- a lot easier. If you saw my Rabbitry tour video then you saw my current (hopefully temporary) setup with the cages single stacked on wooden pallets with legs. I don’t recommend this. But, at the end of the day, it does work and I am thankful that I even have rabbits. Especially that beautiful and dry rabbit shed! It’s good to be a rabbit here at the Frühlingskabine.

Start your Planting Plan for Spring with me (if you haven’t started already). Since we can’t really plant anything until March, due to late frosts, I am starting with a list. Next I will draw up a visual crop placement plan using the “square foot method”. But for now let’s stick with my shopping list of seeds.

I am still trying to find my ideal online seed shop. Burpee is a big name but I don’t want hybrid seeds and that seems to be what they have the most of. I want heirloom, untreated, pesticide-free seeds.

I will start these like last year and buy an organic one at the market then section and plant:
Garlic
Potato

If space were no object I would have a lot more chickens. Not for the eggs per say, but for the visual variety. Chickens are fun to watch and relatively easy to care for so why limit yourself to one or two breeds if you don’t have to? Personally we live in a heavy residential area and I’m sure our neighbors (or certainly the anti-livestock homeowners association) would not appreciate every chicken I pine for… in our backyard. We both understand and respect this unspoken rule which is why we limited ourselves to six hens. No roosters. Docile, quite, friendly hen breeds only. Coop cleaned often. Enough said.

But what if we had the room for as many pretty breeds of poultry as we could handle? Let me show you my “more land, less neighbors” chicken wish list. (By the way mom, the poultry breeds book you bought me for my birthday has left me wanting one of each. *wink*)

Frizzles
not a breed but a mutation

Jersey Giant
I saw one at the feed store and it was unbelievably huge (the same height as Cami who is 2)… I want a whole flock of both white and black feathered Jerseys!

Mille Fleur Bearded, d’Uccle rooster
I would just look at him all day…

These are the five eggs I collected this afternoon. Can you believe we are up to five a day already? I think there may be three or even four hens laying at this point and my clue is the color and pattern of each egg. I have heard that each hen lays the same patterned/colored egg each time… so it would stand to reason that if we have four different looking eggs; we have four different laying hens.

If you look closely at this picture you may be able to spot the differences, but it is much more obvious in person. The egg on the far left is very pale with a blue tint, the second is medium in color with a rose tint, the third has a handful of large dark brown speckles, and the last two on the far right are covered in tiny white speckles.

Let me know what you think. Have you heard of eggs being distinguishable between hens?

So… I did try to modify my Magical Bread recipe from loaves to rolls. And guess what? I was successful!

I made the recipe as normal (doubled for two loaves) and then split each loaf worth of bread dough into six. In total, two loaves worth made twelve rolls. Then I let them rise for the second time.

I could only fit four rolls in my 5-quart Dutch oven at a time. Now, to Trevor’s dismay, I think I need another Dutch oven to make twice as much magic in a shorter amount of time.

Bake covered at 475 degrees for only 25 minutes. To give your rolls a crispy shell, uncover and bake an additional 3-5 minutes.

Go ahead and give your bread a try as rolls. We used our fresh baked rolls along with soup last night and as egg salad sandwich rolls this afternoon. Delicious!